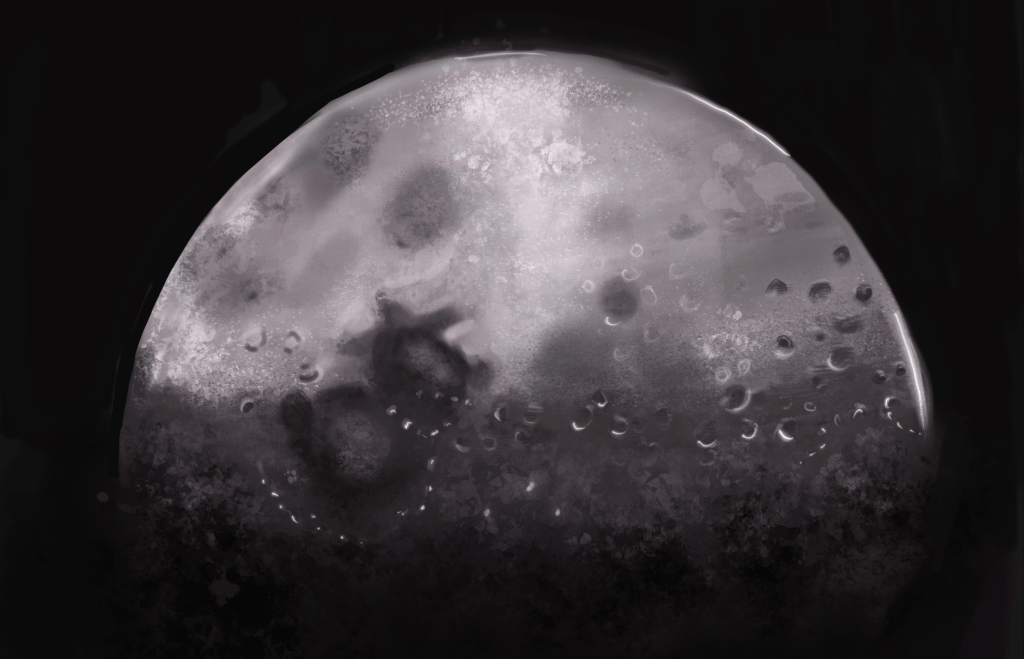 The Interior of the Moon

Look up at the night sky, what do you see? Well I hope you said the Moon, because usually you can see it every night, unless it is a new Moon. When looking at our Moon do you ever wonder how it was made and what makes it unique compared to Earth?
ORIGINS
According to the most recent model for the origin of the Moon, it was formed after a giant impact between early Earth and a Mars-sized body now called Theia. Once this monumental impact occurred, there was a large amount of material that was left to orbit around the Earth. The Moon would then form from the accretion of this material. In fact, according to isotope dating of lunar samples, which is a method for determining the age of a rock based on the concentration of a particular radioactive isotope contained within it, it is plausible that the Moon formed around 50 million years after the origin of our Solar System!1 At the time of formation, due to the impact releasing enough energy to liquefy the ejected debris and the Earth’s crust, the newly formed Moon acquired a magma ocean as the Earth did. Focusing on the giant impact hypothesis it was found from the Apollo program that the lunar rocks showed a similar composition to Earth. This brought a new perspective as it was originally thought that the Moon’s composition had more of the debris from Theia than from the early Earth. Looking at the Moon and Earth in a new light, what other similarities could they possess between each other or are they quite different? From this origin model, there have been studies performed to confirm that the Moon possesses a small core. With a re-analysis of Apollo-era lunar seismograms it has been hypothesized that the Moon possesses a solid inner core and fluid outer core with a partially molten silicate layer in the lower mantle, which is very similar to Earth. What has been unsure is what the lunar core is exactly made out of, so there have been experiments to identify what elements are present and compare it with Earth’s core composition. By focusing on the Moon’s formation rather than the Earth’s, we can get a clearer picture of what made the Moon what it is today. The geological processes aren’t so active as Earth’s processes. Since the Moon’s core is only different in size to Earth, according to the most recent studies and the giant impact hypothesis, then light elements—sulfur, silicon, oxygen, and more—could be present enough to affect the lunar core like they do in Earth’s core.

Sulfur (S) is an important light element in the lunar core, since it represents one of the major trace elements that make up the cores of the parent bodies of meteorites, terrestrial planets, and large satellites. Since the core of the Moon is considered to be iron rich (Fe) there have been experiments using sulfur (S) to clearly identify the outer/inner core compositions of the Moon. Figuring out the properties of the Moon’s core has great potential in setting up future experiments to analyze the origins of other terrestrial bodies and to further research towards learning about the creation of our Universe. So, what has been done with this goal in mind?

LUNAR CORE ELEMENTS
In an experiment done in 2014, a team conducted velocity measurements on four different liquid compositions such as pure Fe, Fe–S 10 weight percent (wt%), Fe–S 20 wt%, and Fe–S 27 wt% under deep Moon pressure and temperature conditions.2 Using this particular method, they applied various frequencies in Megahertz (MHz) including 20 MHz, 25 MHz, 30 MHz, 40 MHz, 50 MHz, and 60 MHz to examine the frequency dependence of velocity, in which the sound velocities determined were independent of frequency.2 The product of this method portrayed the sound velocity and density of Fe–S liquids at high pressures that were analyzed. It was found by experimenting with the Fe-S compositions under lunar pressure and temperature that during the cooling of the Moon, the solidification of the liquid Fe–S lunar core initiated from the top of the core and proceeded downwards.

From this it was concluded that the iron particles would sink to then re-melt at deeper parts of the core and further cooling would precipitate iron throughout the entire outer core, which would lead to the formation of the solid inner iron core. In another experiment performed in 2016, segregation of the iron–sulfide metallic phase during partial melting was modeled by means of high temperature centrifugation experiments that were performed on Earth that simulated the Moon’s interior environment. This setup imitated the gravitation levels and a temperature closest to the Moon’s statistics throughout the whole sample at high experimental temperatures to simulate the partial melting that would host the iron-sulfide phase. The bottom portions of the samples were found to host iron–sulfide segregations whose content increases with decreasing oxygen fugacity in the experiments. Oxygen fugacity (ƒO2), which is defined as the pressure percentage that oxygen composes within a system and is a fundamental thermodynamic property governing redox potential in solid Earth systems. It was found that with a decrease in oxygen fugacity (ƒO2) it was favorable for the segregation of iron-sulfide melt from the compositions.3

From this experiment the metallic iron phase was effectively separated in the form of melt droplets and these droplets were accumulated in the lower portions of the samples, which displayed that the iron in the iron–sulfide melt would gravitationally sink closest to the lunar core. According to this experiment,
the Moon’s inner core is currently dominated by iron particles, with some sulfide particles left in the outer core after segregation.3

These two experiments demonstrated the lunar core formation to be highly affected by the presence of sulfur, which could have resulted in the iron-rich lunar core that is studied today. Comparing the Moon’s core with Earth’s, the Earth’s core is mostly made out of iron according to past studies with small concentrations of Nickel and Silicon present.4

Unlike the Moon, Earth’s core elements also include Nickel and Silicon, while the iron in the Moon is closely associated with the sulfur present. There is another main difference between the two that has been figured out by forming experiments in regard to the deep interior of the Moon.

As the cooling process of the Moon continued, it would have precipitated Fe throughout the entire outer core, to then form the solid inner core as iron gravitationally sinks. This lunar inner core forming process contrasts with the growing inner core scenario that is the leading hypothesis for Earth. The Earth’s solid inner core has been generally thought to have formed by the gradual solidification of the liquid core as the Earth cooled during its formation.5

This growing inner core scenario for Earth is focused on the inner core slowly growing as the liquid outer core at the inner-outer core boundary cools and solidifies due to the interior cooling of Earth. Similar to the Moon the iron crystallizes onto the Earth’s inner core, but unlike the lunar core the liquid above it becomes oxygen heavy and less dense than the outer core. This process then creates convection currents in the outer core due to the solidification of Earth’s iron rich core.6 Clearly, even the formations of the Moon and the Earth have certain similarities but large differences. For example, humans can breathe on
Earth, but not on the Moon without a spacesuit!

FUTURE IMPLICATIONS
Looking towards the evolution of the Earth-Moon system, we can see that they are quite different despite the fact they contributed to each other’s final formation. Focusing on the formation of the Moon and the lunar interior scientists can gain a base understanding of how exactly the Moon was created. Although it would be easier to closely study the Earth to figure out its first stage of development, we can’t do so as the Earth has changed so much with the time. This is why scientists are focusing so much on the Moon, since it hasn’t had great geological transformations like the Earth has. The knowledge gained from the deep analysis of the lunar interior could then be used on other planetary bodies to understand how they formed, what their main elements are, and why they are unique in their solar systems. In fact, by studying the interior of the Moon we can develop techniques to further study Mars to see if we can live on that planet in the future!