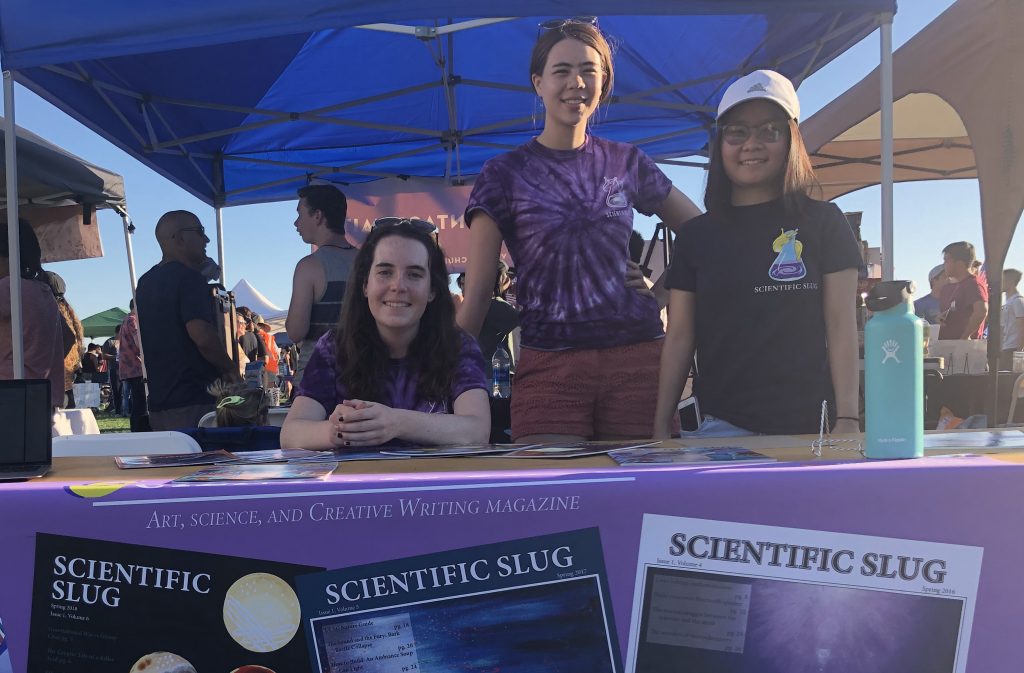 A Letter from Olivia

I’m Olivia and I’m graduating after having been in Scientific Slug for all four of my years at UCSC. Admittedly that’s a bit of an exaggeration. I joined at the very end of my first quarter of my 1st year. But from the moment I joined, I suddenly became incredibly invested and involved. And it kinda changed my life.

See, at the time I joined, the org was about 5 members strong, having had several seniors graduate the previous year and poor fall recruitment. I was young, eager to participate, and needed. Having just taken a class on museums, I was inspired to write an article about the history of science museums, and there was a whole team—of four upperclassmen—who really wanted to support me doing that.

I wrote a 6-page article that year, with a two-page spread title page. I interviewed 4 people for it. I was first to finish my draft, first to start laying it out on InDesign, as a junior signer, Rachel Varnau, mentored me. When we had to look at the proof/draft at the printers and approve it, I went with Rachel and noticed that we’d printed the year incorrectly on the cover. “That’s why you brought her!” the Print shop owner laughed.

When all the copies were finally ready to pick up, 4 of us bused down to a signer’s house. He showed us the baby chicks he and his housemates had recently bought. A few of them escaped and we helped grab them from behind the couch to return them to their little cardboard box. Then we piled into his pickup truck and drove off down the 1 to the print shop. We took two wrong turns which extended our trip by a good 15 minutes, but we got there and loaded 1000 copies of our 2018 issue into the truck. It was one of the most fun days I’d ever had. I was a part of something cool and exciting.

I became a signer the next year. I was kind of the only option, but I also knew I was the right person to step up. I basically had a front-row seat to the whole process my first year. I was excited about the opportunity, and eager to learn. That said, I was also new to the whole “student agency” thing. At my first student media orientation, after hearing all about how much we had to do in order to simply register the org, my advisor approached me and asked how I was doing, and I started crying as I choked out “I’m a little overwhelmed.” Susan gave me my first confidence-building pep-talk that day, and I’ve loved and trusted her ever since.

That year I learned so much. I learned about SOMeCA, student agency, how to schedule meetings like a professional, how to understand my own leadership style. Others joined the org, too—Rachel, Raina, and Maggie—who are awesome and smart ladies. I almost didn’t write an article because I couldn’t think of anything and “wanted to focus on the podcast,” but inspiration struck, and I pushed the podcast to the back-burner to write another 6-pager about race and genetics. That year I remember designing the cover art right before this big alumni event at SOMeCA. I met Scislug alumni, gave them our new purple tie-dye sweatshirts, and showed them a preview of the next cover and watched them burst with infectious pride and excitement.

The next year, although Simone was still the oldest, I was suddenly the new primary signer, and I had new ideas. I had ideas about the podcast, about dividing up signer responsibilities, and boosting membership. And I wasted no time to enact my visions. Maggie and Rachel joined in as signers, too, and they were right there with me.

For the first time, we had designated roles that made it easier for us to divide and conquer each task. Although I was technically publicity signer, I made myself a jack-of-all-trades, and organized as much as I could. To boost retention, we started using a messaging app to keep in contact with everyone in the org. All of a sudden, we weren’t losing so many members at the beginning of the year. All it took was checking in with people, asking what their goals were in the org, and supporting them. We were joined by Sam, Emily, Mrunal, Nathan, Archit, Mikayla, and Gabrielle. We actually produced podcasts that year, and got to know each other in library study rooms, laughing into borrowed microphones. That strengthened sense of community helped us when the pandemic hit and we were all forced to produce under new, remote conditions. Nonetheless, we succeeded in printing a limited run, and sent mags and shirts to members far and wide.

This past year was one of the most challenging. We could shift our focus from getting grants, but we needed to deal with new challenges as remote learning became more intense for people, changed how people were able to lend their time and energy when taking hard classes, living with parents, deciding to graduate early, moving, getting jobs and internships, and dealing with mental health struggles. I was privileged enough to avoid many of these complicating factors, and I think that that stability helped me remain a strong and constant force in the org. Two members stepped up at separate times as elected signers had to step back. It took flexibility and patience and a lot of trust. In the end though, we had a wonderful team and a surprisingly large staff. Check-in questions and carefully planned meetings led us through week by week to where we are now.

I don’t really think that it’s merely narcissistic to say that I’ve left a significant legacy at Scislug. After four years, it’s somewhat inevitable. But I’ll admit that I felt particularly dedicated. That first year, I fell in love with being able to be the steward of my own project. I could write about whatever I wanted, on my own timeline. I had a sense of ownership of it. While I normally have a very strong sense of obligation with things in life, there was none of that here. I was doing it for myself, and no one else. When I became a signer, that project wasn’t just my article, it was the entire organization. Partially by luck, I never got so busy that I couldn’t put Scislug first on the agenda. I put a lot of time and energy towards leading the org forward. And as the type of leader who takes initiative and takes up space, I became a dominating force, to a fault sometimes.

And it’s coming to an end now. And I have to say that it’s making me sad to have to bow out. But I’m immensely proud of everything I’ve done with my Scislug comrades. I cannot wait to come back as an alumnus, and, like the founders I met back in 2019, burst with pride for what younger members achieve.

1 thought on “A Letter from Olivia”