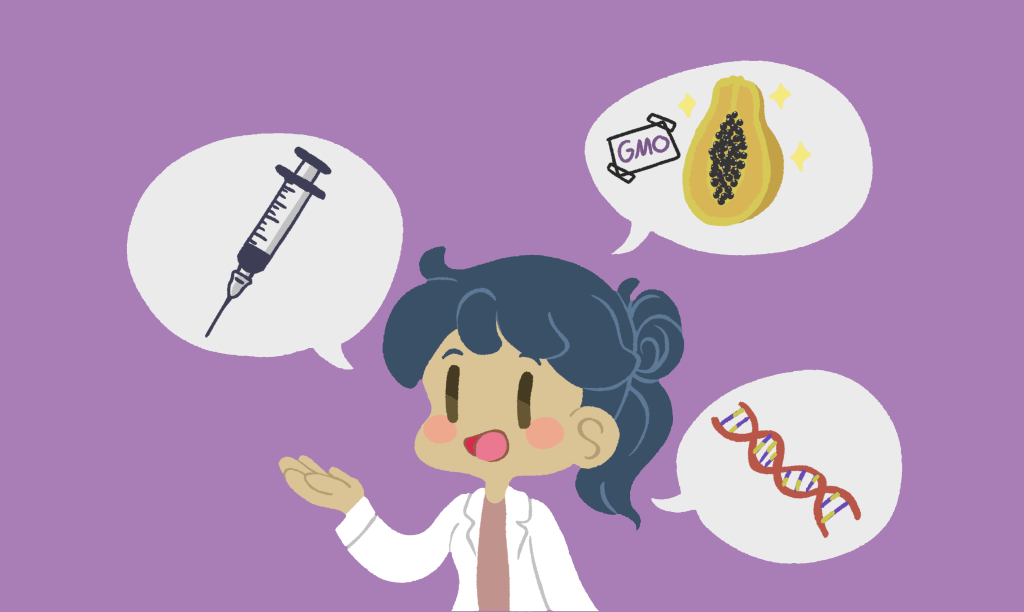 Flashback to late March 2020. An overwhelming majority of businesses and schools are closing their doors because of a new virus spreading across the globe. Many are confused, scared, and panicking as toilet paper and masks are selling out. Where does everyone look for answers? Most turned to their phones and televisions as a way to process what was going on, and what did they see? Hundreds of articles, news reports, Facebook posts, tweets, and White House press briefings all attempting to decode the virus and shed light on the pandemic. With the prevalence of misinformation and sensationalism of news, there is an increased need for the communication of pertinent scientific research and knowledge between scientists and the public. In this digital era, people are interacting with information more frequently, and effective science communication is important now more than ever.

Science Communication (SciCom) is both a field and a practice, as well as a Master’s Program at UC Santa Cruz. Science communicators must interpret research and scientific topics to inform, educate, and present this information cohesively and accurately. SciCom is found in every aspect of the scientific information chain, from academic journals to review articles, mainstream media reports, and social media platforms like Instagram and Twitter. In fact, this very magazine is a facet of scientific communication! However, SciCom is much more than just communicating scientific topics. It is heavily involved in informing government policies, making laws, and is becoming increasingly relevant to our personal lives. Effective scientific communication can help make complex information more accessible and understandable for everyone, regardless of their familiarity with the material.

Policy-makers often look at scientific facts before making and passing significant legislation, but when science is not communicated properly, flawed bills can be passed —like those revolving around genetically modified organisms (GMOs). As genetically modified (GM) foods became more prevalent in the late ‘90s, the news coverage of GM food research quickly became diluted with wild fiction. Negative buzz words like “frankenfood” soon became associated with GMOs, leading to premature bans and restrictions on GM crops by many countries around the world.1 Additionally, the United States plans to implement the required labeling of GM foods in January 20221 —an arguably biased policy because of the implication that GMOs must be unhealthy if they are labeled. Amidst this confusion and misinformation, mountains of scientific evidence have been published showing that GM foods are not only safe to eat, but can provide extraordinary nutritional and agricultural benefits. Take the Rainbow Papaya, for example. In the early ‘90s, the Hawaiian Papaya industry was nearly destroyed by the papaya ringspot virus, until it was single-handedly saved by the genetically modified Rainbow papaya that was resistant to this virus.2 Golden Rice is another beneficial GMO that was designed to fight Vitamin A Deficiency and malnutrition by containing an increased amount of beta-carotene, a vitamin A precursor.3 Because of inadequate scientific communication with the public and lawmakers, however, GMOs still have negative connotations. The consequences of this are reflected in increased prices for non-GMO food, less sustainable farming methods, and fewer potentially life-changing breakthroughs.

THE STUDY THAT CRIED WOLF

The science news we consume impacts the decisions we make to preserve our wellbeing and thus on a larger scale impacts public health, as observed in the debate about measles, mumps, and rubella (MMR) vaccinations. In 1998, an early report paper published in The Lancet made a questionable claim that the MMR vaccine could cause children to develop autism.4 Not only were the twelve subjects of the study chosen because they both had the MMR vaccine and symptoms suggesting autism but the research was also funded by a group of parents who were attempting to sue MMR vaccine manufacturers.5 This study was exceptionally problematic considering autism was understood to be a result of atypical prenatal neurodevelopment, not something that could be developed later in life. However, the media overlooked the facts and sensationalized the research paper, ultimately spreading detrimental misinformation regarding a correlation between vaccines and autism. As a result, fewer parents gave MMR vaccinations to their children, leading to multiple MMR outbreaks.5 In 2019, the US saw its greatest number of measles cases since 1992, the majority of which were unvaccinated.6 Even though this deeply flawed and medically unsound paper has since been retracted, the shockwaves can still be felt over 23 years later. A slew of people continue to perpetuate the narrative that vaccines cause autism, and others generally remain skeptical of vaccines.

What can we learn from both the GMO and MMR disasters? SciCom needs to be a common practice amongst scientists. There are less than 30 SciCom programs in the United States, two of which are at UC Santa Cruz and UC Berkeley. That is not enough. Additionally, scientists need to communicate their research more clearly. The audience of these papers may be much broader than initially thought. So when writing about their research, scientists should consider using understandable terminology and explaining things that may seem trivial. Not everyone understands the scientific process and intricacies of a particular topic. Finally, the collaboration between scientists and the media to jointly inform the public is paramount. This fosters open communication about scientific topics, as well as eliminating future misunderstandings or misinterpretations like those with GMOs and the MMR vaccine.

Of the drastic changes that the pandemic brought to our world, there is one silver lining to this tragedy. As COVID-19 vaccines continue to be distributed to the public and world leaders encourage the masses to get vaccinated, effective Science Communication has substantially improved. The Pfizer, Moderna, and Johnson & Johnson (J&J) vaccines —to name a few— were developed in record time, using a mix of traditional and new methods. Due to a combination of speed and mRNA vaccine technology, many were initially skeptical of Pfizer and Moderna. In response, news reports, articles, tweets, and even TikToks circulated, explaining how cutting-edge mRNA vaccines work. This explosion of productive science communication allowed people to understand how these new vaccines work and consequently helped people with non-molecular biology backgrounds to engage with this interesting scientific topic. After being pulled from distribution by the CDC due to rare cases of blood clotting, the J&J vaccine has officially been recommended for use again as of April 25th. How this information is handled and communicated to the public will be vital to help people feel comfortable about getting vaccinated. So far six cases of blood clotting have been identified amongst the 6.8 million people who have received the J&J vaccine, classifying it as a very rare side effect.7 Going forward, it is important to acknowledge and communicate the risks to the public, however it is equally important to highlight that the purpose of spreading awareness is not to deter people, but instead to keep people vigilant. By being aware of this rare side effect, people can hopefully catch the symptoms early and therefore receive treatment. Looking towards the future as we start to slowly recover from the pandemic, effective SciCom can hopefully alleviate vaccine hesitancy.

It is important to keep the public informed about various scientific research and discoveries that can affect their personal lives and decisions, so it is just as paramount that science is communicated in a way that is accessible to everyone. By no means should complicated terminology be sacrificed from scientific discourse. When communicating with the public however, Science Communication must be handled properly in order to promote the accurate transfer of information from scientific literature to media platforms.

1 thought on “When Science Communication Fails”