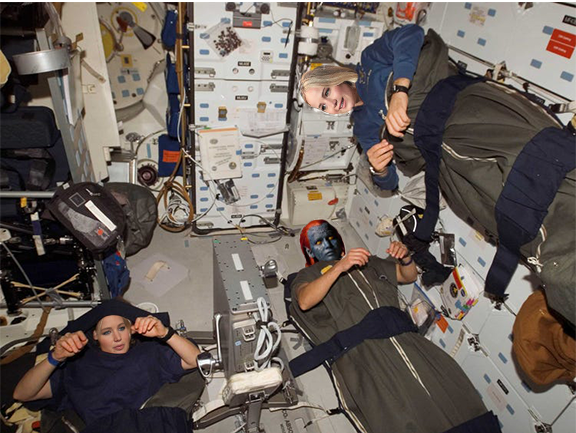 Space has been a fantasy I have recently been exploring. I love space-themed movies and TV shows; they provide a detailed feeling of extraterrestrial life outside the one we’ve known. Aesthetically, space can be a beautiful setting or an amazing plot point to a movie, like it is in Guardians of the Galaxy. Stories that are accompanied by the mysteries of time and space expose me to a new world of opportunities. Where I’m not bogged down by physical properties—where I can live freely without gravity holding me down, unless I’m in a spaceship with a “gravity atmosphere” built in. These movies are the reason we Earth-dwellers fantasize about space, using it as a genre for our own narratives. But that narrative can only be taken so far; thriller, horror or even documentary styles and themes can be applied to space without ruining the mystery of the unknown.

Romance has no place in the intergalactic future. From Zap Brannigan from Futurama to even Aurora Lane from Passengers, romance is the very thing that will lead us to the end of fun space trips for humans. Someone is gonna copulate in that spaceship for the “survival of the human race,” and I want to know (for a friend) if I should blindly believe what movies tell me about space. That I can have a sexual escapade in a spacecraft and expect nothing different to my normal, gravity-riddled life. The very point of a romantic film is to extort a small reality for the viewer, but how do we know that reality is real? We’re not naive enough to fall for a trope without questioning its very possibility. But that still raises an important question: why would people want to have sex in space? And more importantly for me, what will this mean for erotic content creators?

For the fellow weirdos of the world, I want to know if it is possible to have sex in space. I want to disprove 1970s space apocalypse novels and show that death is better than space sex. To start, we know that the layout of the space shuttle would provide little to no privacy to astronauts, unless they are into exhibitionism, of course. The five-person crew generally splits up for sleeping time: two of them bed down in a pair of tiny crew cabins at one end of the station, and the third might jump in a sleeping bag at the other end, almost 200 feet away. (The panel-and-strap design of a space bed might not be that conducive to lovemaking.)[1]. On a larger shuttle with a crew of five members there may be enough space (technically) for the spontaneous couple, but it might be difficult to get alone time. Plus, to actually get busy on the shuttle, we’d have to utilize the space bed: a super uncomfortable pallet bed attached to the wall of the shuttle with straps. Theoretically, it’s possible to have sex in space, but the mood might feel more like a psychological thriller than a romance.

But what is sex in space like and is it worth it?

The only ideas of sex in space are from media, are romantic thrillers like Passengers or in novels like Red Mars by Kim S. Robinson. Films made to lower your expectations of space and force you to assume love is always in the air, even in a vacuum. But the astro club isn’t really worth it at all, if we really thought about what quality porn we could have gotten from space it would most likely be a snuff film, that feels crude and eerie to the viewer. But then again this is all speculation, the real way to know is to ask or to research it ourselves. Either way, NO sex in space…for now.