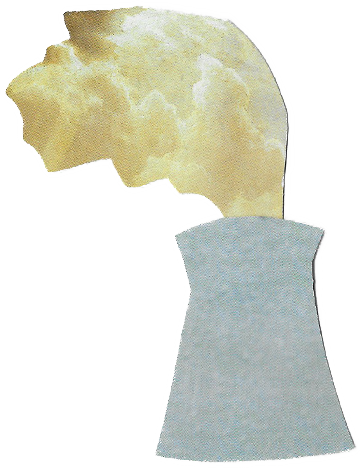 Despite all the filth we have created for ourselves, we somehow always manage to find a way to thrive comfortably. What makes this so amazing is how easily we can pull ourselves out of the grime and innovate when we really want to. Our most magnificent feats come about in times of desperation, whether that be war, famine, disease, or any other seemingly intimidating obstacle we face. However, we are currently facing our most daunting challenge: ourselves.

As a collective, we have caused irreparable damage to our home and the creatures that inhabit it. As we scramble to find the answers to our problems, we grasp at ideas that seem nice in theory but can lead to even more disastrous results in the future. One of the most prominent ideas presented is that the future of sustainable energy lies with nuclear energy. Nuclear power has the potential to create a large enough amount of energy to replace over 50% of our energy infrastructure. [1] However, nuclear energy, like fossil fuels, is a dangerous path that could cause more environmental problems than solutions.

It is important to differentiate between the three major types of nuclear waste: high-level, intermediate-level, and low-level. High-level nuclear waste (HLW) generally refers to used fuel from nuclear reactors and is often what is being discussed when waste disposal is brought up. Intermediate-level waste (ILW) requires some shielding due to its radioactivity and usually manifests itself as chemical sludge, resins, and metal fuel cladding. Low-level waste (LLW) refers to objects that may have been exposed to radioactivity, including tools, papers, clothing, and gloves.

There are manageable ways to store low-level waste until they are safe to dispose of, and it generally only takes two to four years to become safe enough to handle. As stated by the World Nuclear Association, “Most LLW … are typically sent to land-based disposal immediately following packaging. This means that for the majority (>90% by volume) of all of the waste types, a satisfactory disposal means has been developed and is being implemented around the world.” [2] LLW is generally sent to land-based disposal facilities immediately after its use, and its disposal has no real problems.

The trouble starts when discussing high-level waste disposal. Relative to the other types of waste, HLW makes up a small amount of total waste, but we have no efficient means of disposal and/or storage. One of the main disposal methods for HLW is something known as deep geological disposal, which can be summed nicely as “we dug a big hole and threw the waste down there.”

This seems like a safe idea, in theory, to wait out the radioactivity of this waste, but it also fails to take into account geologic processes. An article by The Bulletin of the Atomic Scientists examines Sweden’s attempts to determine the feasibility of long-term repository use: “Sweden is underlain by granite, and its radioactive-waste disposal organization, SKB, discovered that it could not find any large block that was crack-free. Cracks offer pathways for the movement of water and leachates from the spent fuel or waste.” [3] The article goes on to point out that SKB tried to navigate this issue by encasing their repository in a five-centimeter thick copper cask, and then coat that in bentonite clay, which is able to swell and should be able to avoid leaching of water through it. However, they discovered that copper erosion rates are significantly higher than expected. If this radioactive waste is able to leach into our groundwater sources, which are often used for agricultural purposes, the results could have serious health implications going forward.

This illustrates just how complex and risky storage of this nuclear waste really is, and how even the most well-thought-out solutions are prone to error. When dealing with this kind of material, an error is not something we can afford to have.

While a lesser issue than disposal, it is worth noting that the politics of where to build these repositories can be contentious. Local communities often will push to make sure these repositories are not built near in their states or where people live. For example, the U.S. federal government’s plan to build a waste repository in the Yucca mountains in Nevada has been repeatedly shut down and faces serious opposition from politicians in the state. In 2018, Nevada Senator Dean Heller (R) took a hard stance against the project, saying “Nevada does not want to turn into a nuclear waste dump, and as long as I’m in the U.S. Senate, I’ll make sure that Yucca Mountain [the project] remains dead.” [4] In a political climate where party lines seem to be the difference between political gridlock or smooth sailing, an extra issue to fight about seems rather unhelpful.

Turning Up the Heat

The ecological impact of nuclear power plants, especially in regards to marine flora and fauna, is a lesser-known issue.

Nuclear reactors need large sources of water to cool down reactors and prevent disasters. Due to convenience, this often means that nuclear power plants are built next to lakes, rivers, and occasionally the ocean. But if these reactors need a constant source of cool water, what happens to the water that has been heated up? Well, it is pumped back out into the water source. The temperature of this wastewater, however, can be up to 20° F higher than the original source. [5]

Radioactivity and waste aside, thermal pollution is another massive issue that has no clear greener alternative. In his book “Coasts in Crisis,” UCSC professor Gary Griggs lists several of many ecological complications that can arise from this, including changes in reproductive patterns, a general reduction in oxygen content, and changes in physiological processes. As Griggs asserts in his book, “With fish, for example, there are many variables such as previous temperature exposure, age, diet, season, and chemical composition of the water that may alter the specific lethal temperature point.” [5] Most marine organisms are cold-blooded, with the exception of marine mammals. It is no wonder that forcing cold-blooded organisms to live in warm water will drastically affect them, or just kill them.

Finally, there is the issue of time. Scientists estimate that we only have around 11 years before we’ve reached irreparable environmental damage, and that means that every second of our efforts going forward should be dedicated to transitioning our energy infrastructure to a sustainable and renewable one. [6]

Not including delays and political hurdles, the minimum amount of time it appears to take to build one nuclear reactor is around 7-7.5 years, which is a massive amount of time when it comes to reducing carbon emissions. The Union of Concerned Scientists, an independent research group, suggests that even if a solar energy plant operates at 25% less power, it would still be more effective than a nuclear power plant, and can be built in a shorter period of time. [7] Wind farms can be built in roughly two to five years and solar energy in roughly the same timeline. In addition to this, both wind and solar energy can be built smaller and more locally on residential properties, unlike nuclear power plants. If we have the means to create efficient and timely energy sources, then it feels as though the risks of nuclear energy are not even remotely worth it.

We have the resources available to us right now to transform our world into a cleaner one and humans undoubtedly have the power to unify and move us forward. One way or another, we must move down a path toward a cleaner future before we reach a point of no return. Our very survival on this planet depends on it. I do not see a future with nuclear energy getting us to where we need to be. If we make the wrong choices now, it could throw us off the path to the future all life on this planet deserves.