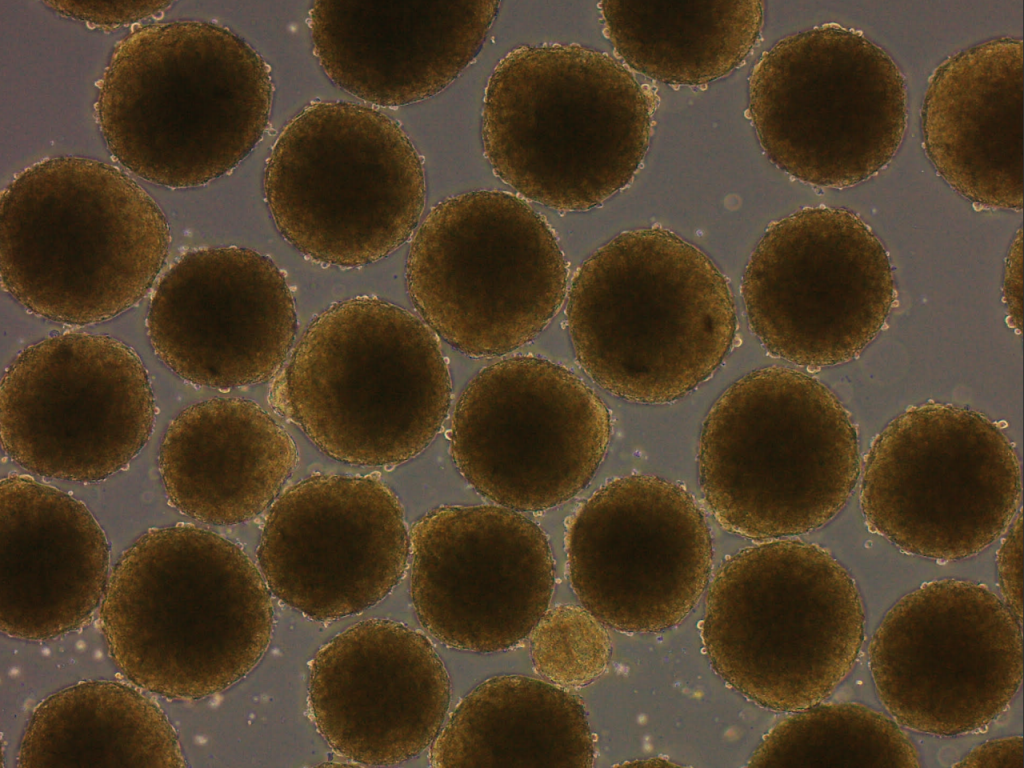 Studying the Brain in 3-D

Imagine growing brain tissue and watching it organize autonomously into a mature, three-dimensional mini-brain. What does that look like to you?

The term “mini brain” can be misleading. These mini brains do have the potential to holistically model the human brain, but not in the way most would think. Achieving research accuracy paired with the development of more sensitive technology seems to be a major hurdle in creating a better model of the human brain. I spoke with UC Santa Cruz Ph.D. student Ryan Hoffman, a member of the Haussler-Salama Braingeneers Lab, to better understand what mini brains are and why they are important. After learning a bit more about mini brains, models referred to as brain organoids, I can tell that there is a lot more to be understood about these structures. They are a fantastic opportunity to research the human brain without crossing any ethical lines, but as with any model, there are some major obstacles to overcome and endless experiments to conduct. By harnessing the potential of brain organoids, scientists are one step closer to understanding the remarkable human brain.

HOW ARE MINI-BRAINS MADE?

A mini brain is an organoid structure that can be developed to model any part of the brain. The creation of brain organoids involves developing cell cultures made from neural stem cells that assemble into three-dimensional structures.1

In a general sense, cerebral organoids modeling the cytoarchitecture of the cerebrum can be created by taking samples of human skin cells, reprogramming these cells to become neural stem cells, and allowing them to self-assemble with the presence of growth factors and other reagents that guide their development and differentiation.1

There are two main ways to do this: self-patterning techniques which rely on the cell’s innate ability to organize themselves and pre-patterning techniques that drive these cell bodies towards a certain identity. Both techniques can begin with either induced pluripotent stem cells (iPSCs) or embryonic stem cells (ESCs), two types of programmable cells.1 iPSCs taken from a patient are great for disease modeling because they can be used to specialize the type of organoid that is created. Both techniques are enhanced by gene editing tools to edit the genome and visualize different traits associated with brain diseases and disorders.

WHY DO WE NEED ANOTHER MODEL?

A lot of neuroscience research at UC Santa Cruz and other research institutions is done on murine (mice) models. However, there are meaningful differences between a developing mouse brain and a developing human brain. Ryan Hoffman provides the example of modeling trisomy 21, or down syndrome, in mice. “When we work with mouse tissue and we want to understand down syndrome, we have to develop a mouse model for Down syndrome because they don’t have what we have [an extra copy of the 21st chromosome]… Even if we induce a trisomy in them it’s not really down syndrome. If we wanted to produce a model for autism or schizophrenia in a mouse, we can’t do that because we don’t understand these disorders the way we understand sickle cell disease,” which arises due to a single nucleotide polymorphism (SNP). Neurodevelopmental and neuropsychiatric disorders are a result of more than just a SNP. This is where patient-derived organoids come into the picture. “It is hard to build the [murine] model and it is easier to find the patient.” iPSCs from a patient can be developed into a three-dimensional organoid that reflects the patient’s genome. In this sense, we can study the cellular interactions of that patient’s cells instead of trying to build a mouse model that has the capacity to resemble human disease.

Before 3-D brain organoid models, there were neurospheres and 2-D cultures. Neurospheres are three-dimensional, but they lack the full level of tissue complexity.2 “The reason organoids get their name is because they recapitulate organ tissue— they are a mix of different tissue types,” says Hoffman. Two-dimensional cultures are important for learning about aspects of neuron formation, activity, and specialization, but “brain development occurs on a planar sheet of neural epithelium and cells will start diving and stacking. Radial glial cells will populate above the neural epithelium and will send out projections radially towards the outer surface. Then neurons will climb up the radial glial fibers”.2 Neurons have to be able to climb and position themselves along the plane that radial glial cells have established. Two-dimensional studies can’t model this because there is no perpendicular axis to start with in the first place.

The organoid model is still in development and may not have the ability to replace nonhuman models such as mice as of yet. Organoids still need to be paired with animal models to contextualize the experimental results. Lots of evidence is also needed to prove the relevance of data seen in organoid models, whereas when studying a live rodent model experimental effects are more easily visualized and understood.2 The importance of the organoid model is that it has created a new way to study human-specific development—it is an opportunity for neuroscientists to learn more about what makes the human brain so special.

The Braingeneers lab focuses on the question “What makes us human?” Particularly, they are interested in the factors that led to the three-fold expansion of the human cortex. They are also working on scaling up the technology to enhance the quality and number of experiments they can perform on organoid models. Hoffman explains that there is always some level of error introduced into the batch—it is unavoidable. Even if someone carries out the same protocol on organoids there will be major transcriptional differences between them; this is called the batch effect. “Minor things that you don’t even think about make a decent difference between these organoids—this is a reason we want to automate, so we have precise control.” Studying the development of organoids is made possible by methods that help scientists understand what types of cells are developing and what genes are being turned on. Hoffman uses a method called single cell transcriptomics to understand the developmental steps occurring in guided organoid development. “The idea is you grow an organoid to whatever time point you’re curious about understanding. We use it to understand the cellular composition of the organoid. There are millions of cells in these organoids. We can get one cell trapped in a little oil droplet and do unique chemistry to that cell by itself and understand what that cell is transcribing.” Single cell transcriptomics has shown to be an essential tool in understanding which cells arise first, what they turn into, and what genes they are expressing at different stages of development.2

A new project Hoffman is working on is the formation of assembloids: fused organoids from different regions of the brain. The Braingeneers lab primarily works with cortical organoids. They direct their organoids to model a subcompartment of the cortex, the dorsal forebrain that has the outermost wrinkly ‘stuff ’ you see on the outside of the brain. The reason they focus on this part of the brain is because it is most obviously different from primates. There are many protocols to develop different parts of the brain such as the hindbrain, hippocampus, and thalamus. This makes it possible for Hoffman to develop a thalamic organoid and a cortical organoid and fuse them to see how they interact. “Fusing” is a challenge. There has to be an intermediate type cell called a medial ganglionic emminus organoid. “We need inhibitory neurons to produce any functional circuits; these come from the ganglionic emminus.” There are orientation issues and, again, the batch effect has a way of interfering with interpreting organoid development. However, a basic understanding of how and where these synapses connect can be understood from these assembloids.2

Digging through evolutionary clues with genetic tools, the Braingeneers found evidence that the NOTCH2NL genes increase the number of progenitors.3 Progenitors are stem-like cells that give rise to more neuronal cells. Their studies of the NOTCH2NL genes showed the development of radial glial cells that stall and have more divisions propagating the pool of radial glial cells thus producing more neurons. The found multiple copies of the NOTCH2NL in humans delays the development of neurons from progenitors which allows more neurons to arise. Three-dimensional brain organoids helped to study this: “a 2-D culture would have biased these types of results. In a 2D culture, you can look at the cellular level to see what NOTCH2NL actually does to those radial glial cells but you can’t look at the global effect and influence of the expansion of progenitors.”2 They then compared what they saw in human cerebral organoids to those of primates. It is important to look at primates, humans, and models that are part of the outgroup such as mice.2 They found that by deleting NOTCH2NL genes, the organoid development resembled that of the primate cortex. These organoids were smaller in size and they matured prematurely, further supporting that NOTCH2NL was involved with the human-specific expansion of the brain.3

In January 2020, Researchers at UCSF came out with a study sharing results of cell stress in organoids that points to uncertainty in the integrity of these models.4 Their results suggested organoids are unable to correctly segregate their cellular components spatially even though their genetic variants match up with those seen in cortical areas in the developing brain. They found these organoids to be activating cellular stress pathways which they believe limits the ability for cells to develop. When organoids were transplanted into the cortical region of the mouse brain, the stress was alleviated.4 Additionally, there is no vascularization as yet (seen in Figure 1) but interconnecting blood vessels may help further the development of these brain organoids.5

The fidelity of these models is still being evaluated and many advancements need to take place to make sure organoids can provide accurate results. While there is a lot more to understand regarding the development of brain organoids, there is also a need for technological advancement to reduce some inconsistencies in the research.

Brain organoids have created a new alternative for neuroscientists to understand the unique human brain. They provide insight to overall brain development and allow personalized studies of patients with neurodevelopmental and neuropsychiatric disorders. Although these models have yet to be deemed reliable, they are extremely valuable in shedding light on some processes we aren’t able to study in non-human models. With the current science and technology boom, these brain organoids are on their way to becoming well-understood structures. From any model there will be a certain amount of uncertainty. However, getting closer to an ethical human brain model provides the means for a deeper understanding of our intricate brains.

*Supplementary Notes: The human brain is initially populated with neuroepithelial cells (NE cells) which are the precursors of all progenitor populations. NE cells have to move towards the apical side (refer to Figure 1). Some NE cells change their cellular features and become radial glia (RG) which divide to produce themselves and a neuron or a different progenitor cell (such as intermediate progenitorsproduces two neurons, basal radial gliawhich self renew as well as create neurons).5

Radial glia are specialized cells in the developing nervous system. Radial glia guide the radial migration of new neurons from the ventricular zone (also the region reffered to as the apical surface in Figure 1) to the mantle regions (basal surface seen in Figure 1). Recent findings suggest more complex roles for these cells as “precursors that generate neurons and glia, and as key elements in patterning and region-specific differentiation.”6